Cars are some of the most solid developments: They have not changed much for the past 50 years or longer: their bodywork received slight tweaks to make them more streamlined as did the interior. The majority of cars sold are still running on fossil fuels. It did seem that this status quo would continue for the next ten or 20 years – until the industry started to be disrupted by technology players as well as by forward-looking, innovative companies. The changes they introduced are groundbreaking and are ushering in a new era, which could reflect the first wave of innovation when the motor car was still new on the (mostly unpaved) streets.

The past decade has seen innovations in everything from software integration to the way cars are powered – and developments are only accelerating. Analysts from PwC predict that the transformation of the automotive industry will be driven by the younger, more technically savvy audience. They are looking for cars that reflect their mobile lifestyle, but also keep them connected with their peer group at all times. Chinese consumers are on the forefront of trends such as contactless digital payment via their mobile phone or one-stop app platforms for convenient downloads. They do not want to stop at a toll booth to pay, but while there are driving through the toll station – enabling a seamless and efficient experience. These kinds of experience will be implemented in Europe and globally in the near future as well. The requirements will challenge OEMs for the next decade as they are manifold: they prefer electric vehicles (EVs) to be more environmentally friendly without having to compromise their mobility. At the same time, they want a certain level of personalization to express their own personality by their. Comprehensive safety features and entertainment options complete their most important requirements. One of the innovations that will become more popular in Europe – and is already common in countries such as China – is the intelligent interior or intelligent cabin of vehicles.

A number of past innovations were already focused on people’s safety when driving, but they also took pedestrians into considerations. These include safety belts, airbags, brake assistant or cruise control. New features go beyond and ensure that no physical harm comes to drivers, passengers and pedestrians. This, for example, includes camera-based solutions that can evaluate the state of the driver in real-time based on facial verification, facial attribute recognition, drowsiness detection, attentiveness detection, dangerous action detection, and other technologies. It can detect driver’s fatigue and attentiveness by analyzing the driver's facial expression and alert the drivers and passengers. This will also be necessary as EU regulations require that systems monitoring drivers’ attention such as drowsiness or attentiveness detection to be incorporated into vehicles. OEMs have to pivot quickly to integrate them as EU rules require them to be part of all cars sold within their borders from 2022 or 2024 onwards. The goal is to lower the number of accidents due to driver drowsiness.

Further safety features focus, for example, child monitoring: it detects if a child is left in the car and alerts the driver, even if the car is switched off as the system is only deactivated sometime after. Each year, babies and children are left in cars. In hot weather, this can lead to the death of the child – something that can and will be avoided with child monitoring technology. This feature can also be extended to protect pets by adding sensors that check for pets in the car and track their well-being. 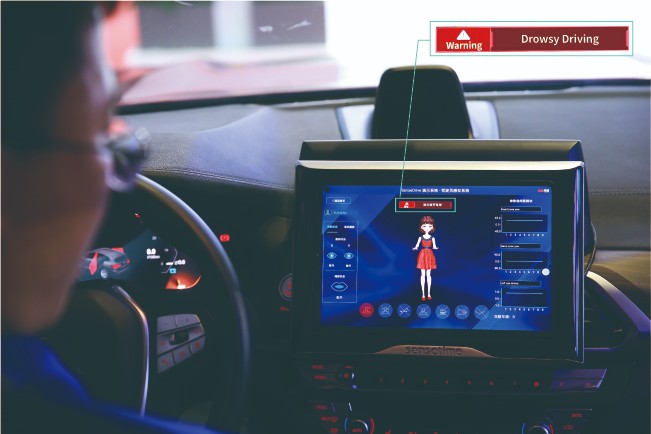 Technically, the system is pre-programmed to identify such attention-impeding signals as closure of the eyes (signifying the danger of microsleep) or lack of attention by tracking eye movement. The alert rate of these features is 99 percent. They are based on algorithms that are self-learning and are getting more decerning over time. Classifications range from normal state to extreme fatigue or distraction.

While such a solution can be based on standard hardware such as IR camera and chip, the software integrates machine learning and artificial intelligence (AI). Ideally, it includes various features like facial verification, facial attribute detection, drowsiness detection, attentiveness detection, gesture recognition, and behavior recognition of distraction. A millisecond-level response rate and low energy consumption are benefits for use in the car.

The application also includes so-called dangerous action detection, i.e. when the driver makes a phone call, smokes or drinks water while driving. In this case, an alert will be sent. The passengers, meanwhile, can enjoy the ride with a number of entertainment options.

Even if safety is an important decision-making criterion when buying a new car, in-car entertainment is another one, especially for the younger target audience. It keeps passengers occupied during longer drives. Safety is still a consideration: while passengers can use all the entertainment options on offer, they are blocked for the driver.

That said, passengers can really enjoy their ride. OEMs are competing about who is offering the best, most flexible and versatile entertainment system. Car manufacturers have recognized that their target groups are using their vehicle for longer drives with friends and family – and the entertainment system is an important feature for them. Once autonomous vehicles will be population the road in the future, they will become even more important. While the surround sound and visual movie theater is still a vision, OEMs and their partners are already working on it to gain a competitive edge.

Today, people expect the same services in the car as they can access on their smartphone. They are considering their safety and comfort, not the added complexity regarding integration, security, and connectivity. To bring this new experience – as well as future ones – to drivers and passengers, OEMS and their partners will need to develop innovative in-vehicle infotainment systems based on easy-to-use user interfaces (UI). These are becoming the hub of a vehicle’s electronic system, which in the future will also be extended to include other entertainment services. The next step will be gaming and movies – these will become more important with a growing trend of autonomous driving. The development will continue at a heightened pace and evolve into an in-car personal assistant similar to in-home assistants which respond to voice commands for navigation, checking the health status of the vehicle or locking the doors with the sound of one’s voice. The personal assistant will be powered by AI and learn to differentiate between voice profiles as well as personal preferences. An additional example of using AI in the car is augmented reality (AR). Apart from using AR to develop new in-car products, it will also be used to individualize the car cockpit. However, unbeknown to many, several features that are already part of the vehicle are using AR today. These range from speed limit sensors, which not only track the car’s speed, but also the speed limits and adapts accordingly, as well as lane guidance, smart rearview mirrors, rear and front-view mirrors. A number of smart displays in new vehicles are also powered by AR. In the future, AR will also be used to increase driver and passenger comfort and safety, for example enabling test safety features or to integrate technology that lets cars “look around the corner” and this avoid bling spots.

Integration and testing are key

On the surface, the integration of entertainment or safety features into the car might seem easy – some pieces of software getting added to the system – but under the hood it is much more complicated. For one, any platform used should be supporting an extensive range of hardware and operation systems, including Android, ARM chips, Linux and X86. On top of that, each car contains approx. 50 sensors adding to the complexity. They track everything from ABS, air quality inside the car as well as positioning and health of the tires. In the future, the number of sensors will grow – as will the number of applications as highlighted by the integration of additional safety measures, but also entertainment options. OEMs need to conduct extensive testing to ensure that these applications do not interfere with the sensitive systems of the car. Thus, implementing only one piece of additional software requires a high amount of development and testing efforts, starting with the platform and going up to features like drivers, interfaces, and bus systems. TTP (Time Triggered Protocol), Flex-Ray or CAN (Controller Area Network) are only some of the technologies co-existing in vehicles. An entertainment system needs to run independently from them to ensure car safety at all times.

Conclusion: vehicles will become more personalized and even more complex

Innovations and the transformation of the market will continue to challenge automotive manufacturers. According to research conducted by Bain & Company, a number of players are betting on a bright automotive future and are investing heavily: tech companies are spending up to $100 billion and financial investors $74 billion – while OEMs are only investing a comparatively meager $11 billion. This also underlines that they need to collaboration with partners to benefit from autonomous driving, EV growth, and shared mobility as well as trends such as personalization, tech and entertainment integration or new safety features.

These trends are already on the forefront in China, but it is becoming more popular in countries such as Germany and the US, amongst others. One example is the digital transformation of traditional OMEs and also their accelerated development in the EV industry. They need to pivot quickly to stay relevant in the market. The inclusion of AI and other cutting-edge technologies will be important factors to achieve this. Collaboration on a global level would ensure that OEMs would be able to integrate the best technologies into their vehicles and gain a competitive edge, supporting the local economy as one of the most important industries.